I'm going to start this post with a quote that I posted on FB yesterday.  I think it sums me up in a lot of ways so I kinda want to save it in jughead51 before I somehow lose it and then I'll round out the rest of this post with some way cool equipment stuff.   Here's the quote.


"People think it's an obsession. A compulsion. As if there were an irresistible impulse to act. It's never been like that. I chose this life. I know what I'm doing. And on any given day, I could stop doing it. Today, however, isn't that day. And tomorrow won't be either".  –The Batman

...So on Saturday Gilles called to tell me he had my 'winter' TIME bike built and ready to go.  'Huh?'  Yep, that's what I thought.  I mean yeah, I wasn't completely surprised by this because Gilles had mentioned that TIME would be sending me a bike to ride this winter but I was still jolted for a second.  I've never had a 'winter' bike before and it just seems sort of opulent.  But hey if there's a winter bike to be ridden, sign me up!  I'm pretty sure I can get used to it.

In actuality though, it makes a lot of sense to have an off season bike.  Winter is really hard on equipment so having a winter sled to train on during the sloppy conditions, especially in New England, is a good idea.  But it isn't cheap, so I'm feeling really fortunate to have such great support from Doug Knox at Time-Sport.com in Santa Barbara, CA working with Gilles here locally along with Husam at ATA Cycles in Concord and Tom Norton (and co.) to make all this happen.  There are a lot of moving parts coming together here so I'm just really amazed that these guys are able weave all of it together and they are great guys too; not just to be around but also because they are great at what what they do.  I learn something new every time I'm around them and that is so rare, you can't really even place a value on it.  So I'm beyond lucky.   In the meantime the Team 2013 ZXRS bike will be delivered in February....so I'm looking forward to that too.   Pretty incredible. 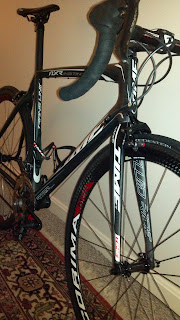 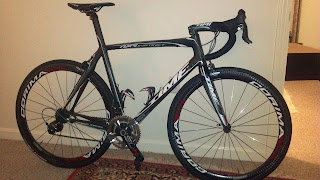 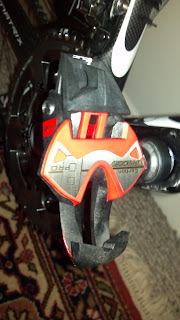 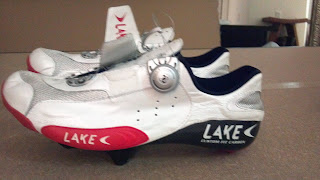 Pictured above, the winter set up;

So all in all, this doesn't suck.  It's actually pretty damn fantastic and  I feel super fortunate, appreciative and totally amplified for a great winter of riding and training with friends all over these here parts... and warmer spots too (perhaps AZ or SoCa) before racing in mid-March out west.  In the meantime, it smells like candy around here...Slurp!