The week after Thanksgiving used to mark the beginning ski season for me and my family.  This was before divorce in 2004 but this time of year still reminds me of these things and I get that familiar feeling now.  Preparing for a season of alpine competition is a fairly big undertaking, ski/board fitting is every bit as complex as bike fitting and with three growing kids in three different disciplines, downhill, freestyle &boarder X it extrapolates. Even though I still think about what the kids will need I'm no longer involved on that level with them in this way, regrettably...its complicated.  But anyway, I still think about what they'll be using and stuff like that.

The weeks leading up to Ski season were similar in a lot of ways to this time of year for riding. Competitive alpiner's and bike riders need to be totally dialed in and in full flow by December.  In ski racing for instance most of the really serious kids (11-16yrs) have been on snow all summer in Chile or Mt Snow or in dry land training camps regionally or both so that by December they're rippin it.

I think/opinion that sixteen is about the cut off age for most of the uber serious kids for training at this level.  Most of them have been on boards since 2-3 years old and if they haven't shown they have what it takes by 15 yr to get a shot at development national team (D-Team) they sort of realign their goals and back off training a bunch.  Most of them still have a shot at Div 2 or maybe Div 1 college so that's still pretty good.  I always liked to say that until 16 years old, success for kids in skiing/boarding was all bout access to training and equipment ($$ thanks mom & dad) but after that the true athletes 'show themselves' and the sport thins out like no other.  It's kind of sad to watch the parents get all unglued over this.  I always thought the kids handled it way better than the parents.  Vicarious living through your kids can kick you in the teeth and alpine parents are the by far the worst in my opinion.  The bottom line is that by 15 yrs old the drop out rate in ski racing and boarding is a cliff dive.  Anyway I've been thinking about these things because of this time of year and this picture taken last week in Waterville Valley, NH. 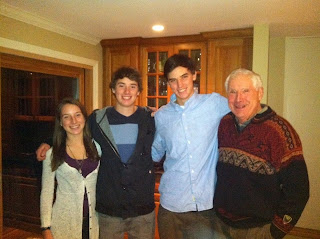 These are my kids; Anna (15), Luke (18 tomorrow) and Stephen (21) with their Grandpa Hawes the opening week of the season which marks the beginning of the next five and a half months of downhill snow sports.  Anna is a ripper alpine racer, solid at everything but especially GS and super G.  She tracks at the top of NE & Nat'l level.  Luke is a freestyle skier & works with a budding freestyle production company based in Waterville Valley.  Stephen still competes regionally and nationally in boarder X and coaches.

So as the snow birds gear up for their season, so do we... the bike roadies.  I wouldn't say either of us are putting war paint on yet but I reckon it's fair to say that we're out there picking the berry's for it. Should be fun.       Peace and roll strong.
Posted by jughead51 at 7:46 AM