I went into Davis Sq. on Saturday and Sunday this weekend.  It's in the town of Somerville, MA right next to Cambridge.  Initially I was heading into Cambridge to watch The Head of the Charles Regatta but on the way down there I got sorta frustrated with all the traffic and decided to detour over to the Diesel Cafe for their Vietnamese coffee.

Davis square is to Boston what Haight Ashbury is to San Fransisco (less the Summer of love), it's an Avant-Garde section, fringie, diverse, inclusive and in some ways ahead of it's time.  Political opinion and commentary aside, I'm guessing that the things you see in Davis Sq will move toward mainstream expression on the face of America at some point.  So it's cool & interesting to hang out there especially when the weather is perfect.


And the weather this weekend was amazing.   Fall has entirely canvassed this place.  The sultry elements of Summer have waned into Autumn and riding the roads this time of year is pure pleasure.  The chilled air, the colors, the amber sun.   I noticed my moving silhouette on the road yesterday.  It was long and thin, framed by golden red leaves encroaching many sections road.   In a week to two the weather will bend toward harsher riding conditions but right now it's super sweet. 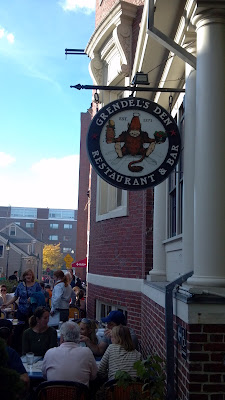 After Diesel I went Harvard Square to meet friends at Grendels Den to check out the Head of the Charles Regatta, which is a pretty big event.  As Regatta's go it's the worlds biggest.  I read somewhere that there were 9,000 rowers competing there this weekend.  I never rowed but I like this sport.  Talk about pain cave? The athletes at the top of this sport wrote the book on it and I respect that.  It's motivating.

I'm looking forward to bike racing next year.  Things in 2012 have panned out to build all the makings for a great season next year.

After some discussion it's official now that I'll be riding for the TIME Factory Team next year.  Their Masters squad won both the Crit and Road Race in Bend this year.  They're based in Santa Barbara, CA and they're a team of uber strong guys.  I guess I'll be racing out there a couple of times and some of them will roll out here a time or two.  Can't wait to ride with them  Should be awesome and I'm totally stoked!