Collect, deep breath,...Okay, so the season ended for me on Monday morning at the Jamestown Classic RR in Rhode Island.  Bitter sweet.  Sometime ago I wrote about 'Post race let down.'  I'm a little prone to that kind of thing.  I've been an athlete for my entire life and I like the idea of waking up on any given morning with the option to do something challenging; challenging in personal extension sort of way that is, not in life trial challenges, which come on their own.

So anyway when I get to this point, with no races around or dragons to shoot arrows into I have learned to be mindful and to re-focus.  I guess that's why I become a active 'fan' of other sports this time of year.  After a while the singular focus of elite athletics is counter productive.  It's too insular and becomes a limiting component towards getting to that next level, or in my case to 'maintaining' a certain level.  So that's why I like to get out there and watch other stuff.  It gets me out of a singular sphere to appreciate and draw strength from the amazing accomplishments of driven and talented people outside of bike road racing.  And I like to see it live.  The texture of being there is different.  It's more visceral and real and I tap into that...or it taps into me.

Bjarne Riis touches on this for cyclists in the Team CSC video Overcoming when he takes his team cliff jumping and sailing.  He took them away from the element of familiarity to expand their perceptions and to build confidence.  People have opinions about Bjarne, his doping admissions and the like, but to me what Bjarne did for his riders is pretty cool and shouldn't be ignored because of the other stuff.  And with all things like this, I think we need to be discerning not to throw the baby out with the bathwater.

So whats on the near horizon this fall.   Well, there's the Head of the Charles Regatta in ten days.  I go every year and look forward to it.  And then off to Grendal's Den in Harvard Sq. after... if anyone wants to join me?  Then, there are a few good Cyclo Cross races left around here to watch and I'll probably catch up on some UMaine stuff.  There will be a few football games within distance and probably a hockey game or two as well.

This weekend I'm hoping to re-connect with some high school alums from  Kents Hill School.  Kents Hill football is playing Dexter Academy in Brookline, MA on Saturday.  Here's a photo of young Beowulf at KH. 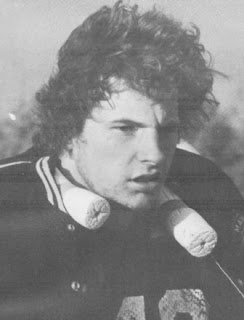 I don't remember which game this was, but from my expression I'm pretty sure it's one of the vast majority we lost my senior year.  I think loosing all the time back then taught me a lot.