It rained really hard all day today and its beginning to feel like fall here.  I love the fall and the rain and there's nothing better than both of them coming together at the same time.  Something about these two elements jive with me.  Call it bio-rhythms or whatever but things just come together, all my cylinders click in and connections happen for me.  It's fun. I dig it but most importantly I appreciate it because things definitely aren't fun or great all the time.  So claiming some ownership around my cherished chilly grey days of fall and the soaking wet rain is good for me and to me.

It's always been this way but I can't know why?  It just is.  There are so many examples of this that I couldn't begin to scratch the surface but to stay topical to jughead51 I can say that my best bike races have been in the rain, most recently this year winning the North East Rapha Gentleman's Race w/Team Upton Bass, in the pouring rain.  And going back much further its worth mentioning that my best sport was football (fall) and my best games were always in the rain.  I still have the game ball trophy after we beat University of Delaware, The Hen's, in Delaware.  It was a huge upset and we did it in a torrential down pour.  It was my last college game too which made it special and there is a epic story behind events leading right up to kick off.

My travel room-mate was this Italian kid from New Jersey named Tippie Spina.  We called him Tippie because he had a small but catching streak of grey hair on the tip of what otherwise would be a flawlessly groomed mane of dark Italian quaff.  U.Del was real close to his hometown so he invited two friends (How yooou dooin?) to stop by our hotel room the night before the game.  That sounded harmless enough to me at first but then they showed up with something like eleventy cases of beer.  'Excellent idea Tippie!  Invite the mob to our room and tell em to bring multiple cases of beer for each of us  (& team mates Donahue&Sid next door).  Outstanding decision...lets invite the Coaches!'  Not that I was complaining cuz I weren't..... But....LMFAO it was crazy?  So anyway the long and short of it is that we partied in the hotel room all night w/ Madonna & U-2 rockin away on MTV.  We never even went to bed.  If given a field sobriety test on the bus ride from the hotel room to the stadium we would all have failed smashingly!

But none of that mattered.  Once I hit rainy field I had the game of my life.  It was freezing cold and a wall of rain was cascading down into the stadium.  It was a day game but so dark out they had to put the stadium lights on.  Their fans were heckling and trash talking crap and throwing all kinds of shit at us...it was amazingly awesome.  I was massively motivated.  I actually won NCAA defensive player of the week for that game, for a second time, but this time it was way more meaningful because there was so much emotion riding on that win. Even the coaches were weeping in the locker room.  It was a real moment & it put the UMaine Black Bears back on the map and they killed it the following yr winning the conference.  It was also special because Delaware's Head Coach, Tubby Raymond thought highly enough of my game that he actually wrote a letter of recommendation to Cincinnati for me which is saying something.  He didn't have to do that.  BTW, I'm not in any way condoning what happened the night before, I'm recording the message that fall and the rain have a positive effect on me. 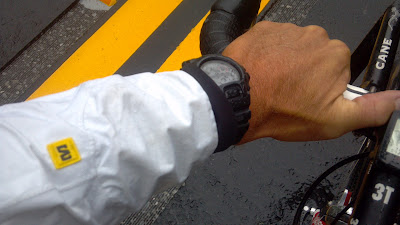 During today's ride into work it was pouring down cats and dogs.  Rain like this reminds me of so many cool and amazing things like the Rapha Gentleman's Race and the Delaware game and many other things, more intimate and personal that are a rich, colorful and an elegant tapestry wrapped all around my life.  They are gifts and I appreciate every one of them.

The road leading out of Harvard this morning was washed crystal clean from the downpour, it looked like shiny black ice, as if a Zamboni had just made a pass.  If it hadn't been so completely clean I doubt I would have noticed how neatly the Mavic logo on my rain gear matched the dbl yellow line on the road.  I would have been too distracted with debris along my way.  But it was that clear and I was able to notice it.  So as the rain let up I moved deliberately to the center line and snapped this nice little picture.  Sometimes it's the esthetic in small things that urge the voice inside to affirm 'fall is here, good things abound always, think of all these things when it rains'.