Of Monsters & Men, From Iceland, land of Vikings.
First concert was in a bike shop.

This entry is a request by some of the guys from the Fitchburg, MA Tuesday night ride.  So thanks for the request guys and here's for nothing.

There probably are harder training rides in NE than the Fitchburg Tuesday night ride but not many.  I've been on faster and hillier training rides too but few that are as physical as this one.  And by physical I mean it's just hard-man riding.  The roads are rugged and sharp out there (about 45 miles West of Boston).  The area has some interesting and legitimate bike racing history too.  The famed Art Lonjo, 1958 Olympic Bike Racer and Olympic Speed Skater grew up and trained here prior to a car accident ending his life prematurely.  To this day I think he is the only American to achieve this tandem Olympic combination in the same year.  Also, the Country's first world famous track racer Major Taylor lived and trained here but to a lesser degree.  Major moved to Worchester, about 10 miles south, to ride & race, leaving his home in Indianapolis. I think Major also went on record saying that in addition to the bike culture up here another motive for moving was that he encountered less prejudice than in Indianapolis.  Peter Nye wrote a cool book about 15 years ago call 'Heart's of Lions: The history of American Bike Racing', which mentions this.  Worcester has a yearly hill sprint race in Major Taylor's honor.  I guess it's on the same hill he used to train on.

And anybody that has done the Fitchburg Lonjo Classic Stage Race (including past winners Lance Armstrong, Tyler Hamilton, Chris Horner, Davis Phinney, Frank McCormack and a raft full of other top guys) can also testify as to the rugged quality of these roads.  If Vikings were bike racers, these are some of the roads they would be on.

This particular group ride has been going on for about 15-20 years running and there's a hard man mindset to it, as I mentioned before.  First of all they leave at 6pm, sharp!  A few minutes late and you're out because they are gone and you're not going to catch on. They fly straight out of the parking lot and keep the pedal down for 2 hours.  I dread and worry more about getting dropped in the first fifteen minutes than anything else.  It's very uncomfortable and something I hate but it's not my ride and not my place to say anything so I just hang in there and suffer the best I can.  But more than anything I feel like the ride is helping me and the guys are really cool to train with, they get it (know what I'm saying?)  so I keep coming back.

My friend Luciano Paven (Luch) has asked me to train out there a while now but I only took him up on it recently.  I guess I've done 5 or 6 rides so far.  I think these rides are helping my V02 uptake and SE and I believe it is is helping other guys too.  Luch, for example, is arguably New England's most improved rider this year getting consistent top 5 placings in 1-2 categories.  Luch also has a full time job and I think that is important to mention for lots of reasons.  Here's what he said  "We ride hard, without thinking much about watts or training strategy.  Its very primitive which makes it in a way meaningful."  Luch was picked up by regional powerhouse Met Life Racing this year and for good reason.  He's flying.

The roads themselves noodle throughout the Mt. Wachusett basin in Worcester Co Mass and Mt. Manadnock Valley in southern NH.  This is land winter haven and the roads show it.  Much of the surface is choppy with an irregular patchwork of pot holes caused by frost heaves that break the road apart all winter long.

After Tuesday nights ride I couldn't believe how fatigued I was, again.  After a while hanging out talking with the guys I recalled an article I read about cutting edge weight lifting technique where the movement is performed on a vibrating pad.  The vibrations make the movement much more difficult and tiring because it recruits deep stabilizer muscle tissue into the movement.  It occurred to me that this should have the same training effect on a bike and this certainly is a part of what's happening on this ride. There's no science here, just my observation.  Don't get me wrong though.  It's not like off road riding, it's just not smooth in any extended section.  A lot of it is choppy and this makes you stronger.


Here's the only picture of Art Longo I could find.  Penny Loafers take it back.  Art was best friends & training partners w/ semi retired NE race announcer Dick Ring that everyone up here knows and loves. 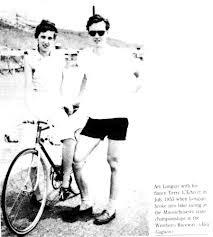 Here's a picture of Major Taylor. 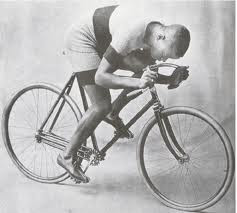