No disrespect but I'm getting antsy for to the real Olympics to start.  Not that most of the sports like swimming, cycling, soccer, gymnastics, wrestling, weigh lifting and such etc, aren't legitimate Olympic Sports because they totally are and I have massive respect for all of them.  But come on now?  Track & Field is the real show.  It's the Olympic Hallmark.  Take Track & Field out of The Games and there are no games(.) 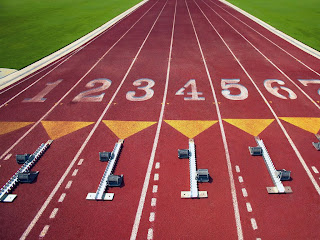 Everyone knows it too, the organizers, the networks, the majority audience and given enough truth serum probably most all of the athletes as well.  That's why Track & Field isn't first on the schedule.  It's last.  And it's last for a good reason, and that reason is because it's the Olympic sport that everyone unquestionable associates with the original Greek games.  It's the oldest Olympic sport and to this day remains the most authentic with Olympic origin.  On this basis one could argue that Track and Field is the best *Olympic sport.  The organizers understand this and that is why they save it for last.  By 'saving the best for last' they keep the world emphatically engaged for two entire weeks.  Basically they're giving us Something to hold on to, something to really look forward to so that we'll watch everything.  No big surprise there, I think its a good thing.. just pointing it out.


To me the butter of an Olympic highlight reel would consist of: Men's track100 meter / women's track 800 / both m&w track 1500 / decathlon / and the track relays.  If the games opened with these events I'm not sure how much more I'd actually watch.  Okay, to be fair I'd likely also watch all the other foot races and the field events too.

One thing's is for sure though, after watching Track & Field I'd have measurably less interest in watching everything else.  I think my waning interest would still be acute enough to keep me watching the profile sports mention above but there would be a steep drop off.  I wouldn't be glued in there for two weeks like I am now.

I seriously doubt, for example,  I'd be watching the early rounds of air rifle and handball?  I mean, they sound super fun n' all and I'd do 'em at a bachelor party, but for me they have an intramural ringtone not commensurate with Olympic rings so I don't associate them front of mind, even back of mind, with the Olympics in any meaningful way.  Just saying.