The Spice in Life

Sitting here on a Saturday morning contemplating what to do is kinda different?  I've been off the bike for a week and thinking about taking another week off.  Back in February I wrote a post about recovery.  That was almost six months ago and the signs around rest described then are back & I'm not second guessing them.

So I have a lot of down time on my hands which isn't 'necessarily' a good thing. lol.  The last time I felt like this I ended up at a Rave in Lowell, MA and lost my voice for a week?


It's times like this that I wish I didn't live among some of the North East's best biking roads because the tradeoff is the lack of nearly everything else (save serenity for writing).  I reckon to be happy here next week when I'm riding again but right now I'm a thousand miles away thinking the Running of the Bulls might be a better place to be! 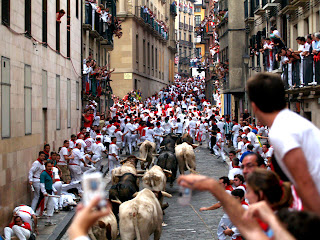 I get pretty damn Rammy with too much downtime.  Sound familiar?  A beckoning wells up inside calling for the existential and memorable.  Tangential experience(s) aren't enough.  I guess a life of just the mundane has always scared the hell out of me?  I think it scares a lot of people but there's a time and place for everything.

That having been said; Hemingway wrote about the Running of the Bulls masterfully and colorfully.  He even participated.  Despite his demons he could connect and he sure knew how to have a magnificent time too by god.  I think he knew the spice in life brings out its' flavor.