So I made the scenic drive out to Southampton, MA yesterday for the Grand HUNdo ride.  It was a banner weather day and I gotta say Western MA is some beautiful territory.  Too bad it's so far from everything else I like.  But it was nice to be out there regardless and to part-take in the HUNdo because it is truly a unique cycling event and was a one of the highlights of the season so far.


The HUNdo is first and foremost an event that includes a very tough ride.  One might even say the overall experience at Grand HUNdo takes precedence over the ride itself.  There's a laid back celebratory atmosphere going on boosted by a sound system van rocking good tunes; kinda like a renaissance festival vibe with an all you can eat feasting of authentically prepared Fowl & Hog Roast and free flowing frosty brew to chase it all down with.  They also set up a giant tent for everyone to gather and part-take under and had an ice cream truck which also gave the whole thing a campy jamboree flair.  They picked a cool spot too, on a elevated pasture overlooking a lovely vista of the Pioneer Valley.  The spot was just above a quaint, shabby chic vineyard where they offered free wine tasting, so it wasn't too bad at all. 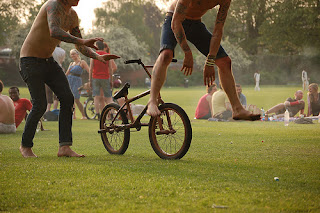 The Grand HUNdo ride itself is an 87 mile trek traversing sharp foothills along rugged country routes including many harsh off road gravel sections.  It is sorta like what I envision a cyclo cross race to be like but this is for 5 hours vs the 50 minutes of most cross races.  It has about 7,500 feet of climbing but distance and elevation are far more difficult over the terrain of irregular sand, loose gravel, roots and rocks that this course offers.  I don't know for sure but I'd guess there was about 35 miles of off road sections.  These roads are the training ground for Jeremy Powers and it's no wonder to me that he won National's last year training out there.

All in all it was a very challenging ride and quite tiring.  On a 'normalized' Cat 1 scale of 1 to 10 I'd give it a 9.3 for technical challenge and a 9.7 for physical demand.  The ride itself was not so much fun as it was edgy, interesting and kinetic.  I guess if you knew the course beforehand these qualities would diminish a bit but as a virgin HUNdo rider I found it to be all of these things...which is a win.

Jeremy, Al and Mukunda, the JAM guys & all the volunteers did an impressive job putting this together.  It was easy to see the effort and thought that went around everything.  Not the least of which was the excellent coordination of safety and guidance around the whole course including the directional signs and the posting of the copious hazardous sections.  There was an awesome outdoor shower and plenty of really good support of water/drinks and Ice Cream stop's and technical assistance provided by two Shram vehicles.

Proceeds of the Grand HUNdo go towards the JAM Fund (Grant for aspiring cyclists) so the $95 entry gives you sense a synergistic philanthropy; which is refreshing.  I think many of us are a little worn out paying $45 for crits that are strictly for profit and that we've all done at least a dozen times before; and that often times leave you with the feeling you've been blocking hockey pucks like a shell shocked goalie for 2 hours.  Crits and road races still have their place though, absolutely.  I still enjoy them but cycling offers an enormous panoramic with many other experiences too.