Pulling into the public garage deck on Monday morning for the Tour of Somerville parking spot number 51 was vacant and I couldn't help but think serendipity was calling my name.  The background on this was that I was registered for the Masters/Legacy race a week in advance but had been seriously reluctant about doing it from the moment I pressed the send button on BikeReg.com. There are various reasons for this but mostly it's just that I'm at a stage in my life where I, at the very least, should begin to consider myself either a Masters racer or a Cat 1 amateur.  I'm in between these two things but I still want to enjoy racing and have it be as fulfilling as possible.

I reckon its all just part of the aging paradigm but there's still a melancholy tapestry draped around the process.  Regardless of this, it's also a real and undeniable chapter in the book of life we must all face.  Managed with grace it can be an awesome and full chapter and wishfully we should all get the chance to read it but many don't get that chance. 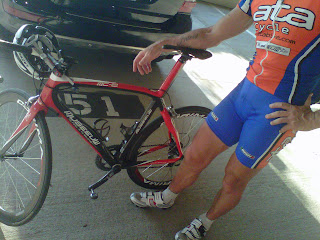 Unloading the car I couldn't ignore '51' painted on the concrete at my feet because this number has meaning for me and it caused me to pause and reconsider what I truly wanted out of the day.  Thought treeing this further, a seam colored in life's uncertainty and fragility surfaced within me.  We can't know for sure where or what we will be in the future and I branched this thread out to the realization that this could be my last chance to race Somerville (The Kentucky Derby of bike racing) or any race for that matter.  And in that moment I chose to enter the Pro1 instead of the Masters.

Not everyone has a choice and Scott Rose was one of those guys.  He was the coordinator of the local TT series in Concord, MA I have been doing for years.  I didn't know Scott well.  To me he was just a friendly guy that seemed to really dig bike racing and being involved but I was still shocked and saddened to hear yesterday that he died on Monday in the early evening from a rare immune system disorder he contracted in January.  He wasn't quite 50 years old, my same age, and passed away close to the same time that my race in Somerville was ending...

.....but I knew none of this as I approached the registration table having already decided to change races.  It's surreal now to know that Scott passed away while I was blessed with an opportunity to decide whether or not to drink from life's cup and live the day as if it was my last.  I'm grateful and happy with my choice but also emotional in life's unpredictability and the unfairness it can sometimes dispense.  In several ways I had one of the best race experiences since my car accident in 08 but save one seemingly vaporous even innocuous decision, I would have missed it entirely.  Lesson learned, hopefully. 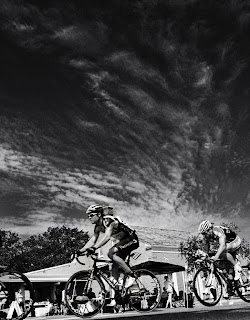 Before the race I got the chance to visit with Mike Keogh.  I was warming up and Mike gave me shout over so we chatted for about 10 minutes.  It's always cool to catch up with him and the progressing journey of Keogh racing.  You can read more about the Keogh Pack here.  Mike is a good friend and we actually talked more about life poetic and such rather than racing per say....as it should be.  And, as it turned out, but not surprisingly, his son Luke ended up winning the thing; and in dramatic fashion I might add, with the surgically applied force and support of his MBK teammates Adam Myerson, Neil Bezdek, Shane Kline and Clay Murfet. 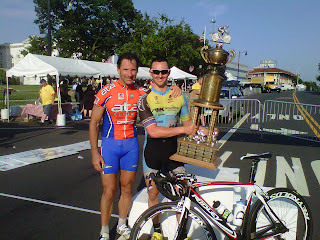 I have raced with Luke and all the Keogh boys (Incl. Jake, Nick, Jesse) since they were entry level Juniors.  Here's a picture of me and Luke after the race.  Luke is younger than my own son Stephen, which is a real time warp for me....and my second son is also named Luke so I feel more than just a racing connection with their family.  Because of this it's more of a thrill to see these kids accomplish such feats in this sport and to share in their pride as well.  I think I was happier for Luke than he was for himself.  Super cool.  That trophy sits in the Cycling Hall of Fame and is inscribed with huge names of past winners from 1940-2012 that echo in the chambers of American cycling folk lore.  Congratulations Luke and the Mtn Bike Khaki Team.