Where can you go after work, share a silky red with friends away from the world and rap all things cycling?  Ata Cycles, is a start.  I've written about bike shop culture and allure in the past but I appreciate this more and more as time rolls on because cool stuff just continues to happens there.

Like most nights I popped into Ata yesterday.  Husam and I were talking and he mentions that he's using a 'heat gun' in his bike fittings now.  Husam is a progressive guy and I guess he observed his car mechanic using a 'heat gun' to index his car's engine performance, or some stuff like that, and thought he could incorporate some of the same principles into his bike fitting process. 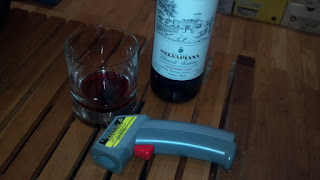 ...a laser gun that measures heat from anything you point it at.  Just point the laser beam at whatever you want and it'll tell you how HOT it is....like this Chianti 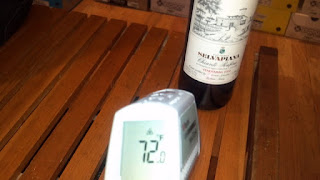 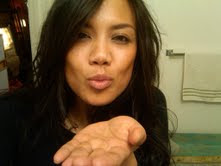 ...or on the legs of a cyclist during a bike fit for use as an augmenting index to know how warmed up they are.  It's instant and accurate.  This thing will even tell you the interior temp of hips and knees.  Impressive stuff.

You can't learn things like this in books.  It comes from innate intelligence and a pioneering acumen.   I suspect we'll see this method copied in the future by some genius with a PhD and a book to their name but remember where you saw it first.