I just got off the scale.  It read 187 lbs which for me is within race weight & I'm surprised because for all intents and purposes I've done basically nothing for almost 2 weeks, and 3 weeks prior to this my training had tapered off from 20-25 hours a week down to about 5.  There are lots of reasons or this and I've written about some of them, but the point is I only step on the scale if I'm motivated to get the ball rolling again and I was really expecting to see 195-197lbs.

That having been said I think there a couple or reasons for this.  Primarily I think the fact that I have been walking quite a bit and a lot more than I normally do and the fact that I've been eating a lot of ethnic food have a lot to do with it.  For instance, I was in Philly a few weeks ago visiting for a while.  Philadelphia, much like Boston, is a walking city (meaning you can walk the whole thing without to much trouble) and so I walked around there a bunch.  I've also been in Boston proper a lot recently too and so have walked there quite a lot too.

You don't see a lot of fat people in the city.  I think it's because the people there are much more active than Suburgatory folk.  City dwellers have to walk everywhere to do anything, so they're in much better physical shape than Suburbatory people.  The city also offers a lot more stimulation than Suburgatory generally does; therefore, not only are city dwellers forced to be more active just getting around, they are also more motivated because there are more things to do, so they burn calories all the time without even realizing it.

I've been in the suburbs for the last several years.  To do or go anywhere out here you have to get in your car and drive.  Basically you end up sitting around on your butt a lot more (a lot more than city dwellers do) which consequently leads to a lot more fat people.  The recent proof for me is that without any meaningful training over a 4 week period I maintained a race body weight without doing much of anything other than walking around a lot...and some bit of cleaner eating.

While on the topic of weight, check these out.  Courtesy of Claire Wood & Keith Kelly at New Balance I was given a pair of these during the Boston Marathon on Monday. I don't know what model/name they are but they weight just 7oz and feel like you're walking on a cloud.  I haven't worn running shoes in years but these doggies have me wanting nothing else on my feet.  No really, they are that good.  And not for nothing, no less than 3 strangers complimented that they looked great on.  That's saying something too, no? 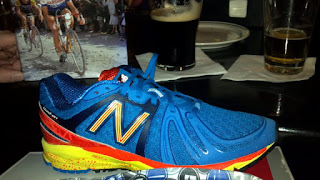 This picture was taken in the second floor of the Solice Pub on Boylston St., half a block from the finish line.  We watched the race from here which was cool.  Literally cool because the outside temp was like 95 degrees and the streets were a mad house of people. But it was a good time for sure.  We ended up spending the night in the Lenox Hotel courtesy again from Kel and NBal.  Kel was exhausted from 3 days of being there preparing for the event and just wanted to get home so he gave me the key to his room for the last night.  Here's a picture from the room the morning after overlooking the finish line. 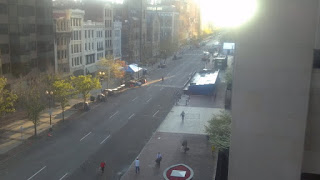 Speaking of weight and comfort, Gilles Lalonde, Corima rep handed me a pair of these to try last week.  They are carbon clinchers and I can't wait to try them.  More info and feedback to follow. 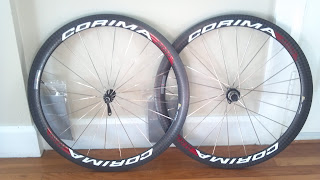