A couple of days ago I mentioned feedback on a new set of Corima wheels I was given by Corima rep. Gilles Lalonde.  I finally got around to putting rubber on them and getting them on the sled Friday evening and I looked forward to testing them on Saturday morning's Monsters Group ride out of Concord.

The Monsters Cycling guys are to cycling what Gentlemen Farmers are to agriculture.   They do it with full passion but only on their own terms and when they want, which is refreshing and cool because it's low stress and really fun.  And like Gentlemen Farmers they know their 'craft' well and do it hard enough to be dangerous, meaning they can actually throw it down pretty damn hard.  A lot harder than you'd expect from a bunch of local friends that don't race would be able to dispense. 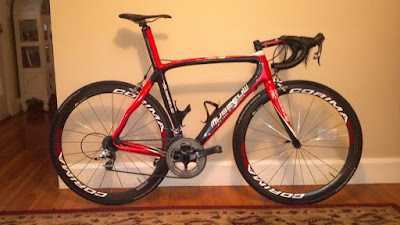 The Monsters have a bunch of different rides, all with different coded names.  I don't know them all yet.  I suspect that one is not an official Monster until, among other esoteric qualifiers, he or she knows the names and routes of all of them.

On Saturday they did 'Sergio's Loop'.  I'm told there is an actually dude named Sergio that dubbed this ride but in two years I've never laid eyes on him.  I think SERGIO is actually an acronym for something nefarious and odd.  Regardless there is a section of road on this ride called  'Glide Hill'.  This is 2 mile down hill stretch that finishes with a few rollers at the bottom.  Monster ride protocol requires that everyone must stop peddling and glide this section as far as they possibly can with the goal of clearing the bottom rollers without a single stroke.

Essentially 'Glide Hill' is a classic roll-out test but drafting is allowed so this makes it more of a roll-out hybrid, which is interesting.  But regardless, 'Glide' was a perfect opportunity for me to check out the rolling resistance of the new Corima Aero's.  I could bore the tears outta you with details but the bottom line is that I took the lead going onto 'Glide Hill" and made it passed the bottom rollers with ease.  In other words I made it wire to wire without drafting at all. I've never been able to do that before.  I've been able to actually make it before but only with drafting.  As low tech as this may sound, I can say with confidence that these wheels (Carbon clinchers) can really, really roll.  I only know one other guy that has been able to make it wire to wire without drafting and he was on Lightweights.  These Corima's, while not chump change and not quite as fast, are half the price of the Lightweight's.

I spoke with Gilles at length at ATA Cycle yesterday. Gilles has a lot of cycling background and its always interesting to hear his insight and spin on all things racing.  It was nice to be able to share the story around the 'Glide Hill' test.   He wasn't surprise but loved hearing it, of course.   He mentioned that Corima wheels were also ridden by Kazak rider Maxim Iclinsky (Astana) to win this years Leige Bastone Liege which, unlike the Monster's Glide Hill test, is an actual substantiated & raging endorsement.

As an interesting aside, La Fleche Wallone Feminine 2012 was won by American Evelyn Stevens.  Evelyn is a local girl from Boxboro, MA, just a couple of miles down the road from here.  She she grew up and cut her racing teeth here.  Congratulations to her!  This was a huge result for her and American Cycling.