'So why do you race, he asked?' Fair enough question I thought then responded 'Racing requires my entire concentration, a place where everything else other than the moment is squeezed out.'  As he gave a slow head up and down affirmation and inquisitive stare I then added additional comment around the adrenalin sensations and acute tactile kinetics of racing and the whole bike chi thing, one within the flow and energy of the pack and such.  All of that is true but still I didn't feel like I'd answered the question completely.

That was 2 days ago.  This morning as I was thinking about it and as chance happens I clicked onto an article about 62 year old Francesco Moser jumping into a Pro1-2 race in NYC last weekend. 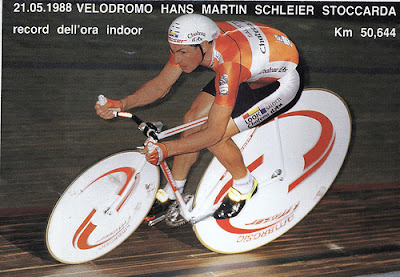 It was the Lucarelli Castaldi Series in Brooklyn's Prospect Park.  I've done this race in the past and while Prospect Park in Brooklyn isn't exactly Paris-Roubaix, (a race Francesco won in 1978,79 & 80), it isn't for pussies either.  It's a racers race and the guys down there roll it for keeps, trust me.  So reading about Moser, a legendary Italian war horse, swinging his axe with the NYC crew brought a huge smile to my face and my only thought was 'dude loves to race.'  There you have it.  A complete(d) answer from Italy's favorite rider.  He just loves to race, plain and simple.  Grazie Francesco.

It's a big world.  Riding isn't the only thing out there. So it's important not to be a jerk over your particular thing.  In other words, don't be 'that guy'.  Here's 'that guy' in France/I think. Given the International theme happening in this entry I think it's appropriate to display that this guy exists everywhere so please don't be him, anywhere, ever!  Thanks in advance.


People do all kinds of other sports and they have the same love for their sport as we do for riding.  Hell, some people's sport is shopping and acquiring stuff.  I'm not sure what that yield's ultimately but hey whatever gets you there.  Just be sure to know where 'there' is.