The Charlie Baker Time Trial (CBTT) is a weekly TT series in Concord MA.  It's been going on for over twenty years and is currently run by the Northeast Bicycle Club.  It's a 10 mile loop and depending on weather gets anywhere from 25-75 riders doing it.

Last Wednesday was the first one of the year.  It was cold and I had no intentions of riding.  My friend John Laupheimer heads it up.  John is making a run at National Track this year and just got back from 6 week training in Tucson, AZ so I headed over there to hang & say hey.  I have a bunch of other friends that do it too and I wanted to catch up with a few I haven't seen in a while.

Like last year CBTT is sponsored by Speed Merchant Aero Research & Testing (SMART). SMART is owned and operated by Armen Pantalone.  Armen is an engineer by trade and not only did he design and build SMARTS Low Speed Wind Tunnel he also does the testing and consultative piece.  Armen is a tech guy that loves bike racing and Bass Ale.  Trust me on both.  Speaking of Tech....


I visited SMART two years ago to gain insight around air drag on a non-aero bike.  Here's a picture below.  Not many guys care too much about this but I race alone most of the time so I have to ride unprotected in the wind more than most so I pay attention to the forces in play here.   I also need to understand this stuff because my shoulders are broad and angular and catch much more wind resistance than many of the better riders who have narrow, tubular (aero) shoulders and don't need to think about this as much me.  And when you race alone every little bit helps.  It's also fun to just tweak around with esoteric equipment.  I guess it's fair to say I have a thread of tech geek in me, so what-eve... 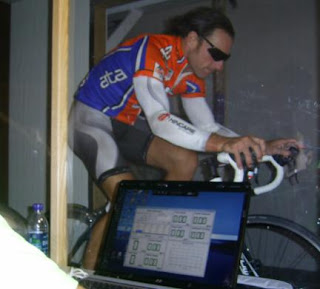 A couple of years ago my training friend (L. Mossman) asked me why I don't ride on a team. We had many talks like this; why we ride, train & race and such, and I remember saying the answer was pretty simple.  I said I'm a local racer & I race locally for fun and there just aren't that many different guys around locally to where it was necessary to be on a team and still have fun.  The bottom line is that I think people lose sight of this. Being on the same team with every decent local rider isn't fun to me and it yields far less challenge than racing solo. I like the autonomy of racing alone (or with one other guy) and I learn more.

The truth is I have more fun racing against most of the local guys than I do racing on the same team with them.  This isn't a statement on them personally in any way because I pretty much like everyone out there..nor is it a statement about myself.  It's just the way it is.  Local racing should be all about healthy competitive fun.  That's it.  I've raced on several good regional teams in the past and these were cool experiences and quite challenging too but I've never actually understood why local racers like to race on these big ass local teams.  The sheer size in numbers forces negative racing which takes all the fun out of it for everyone.  This puzzles me.  To each their own.   Peace and roll strong.
Posted by jughead51 at 8:01 AM