I'm back in pocket in Harvard after a week off with time spent in Philadelphia & DC. My initial plan was to visit a friend in Philly and my sister in DC, have some fun and do a bunch of riding in-between but it didn't work out like that.  I definitely had fun but only got one ride in all week.  It didn't bother me though.  Whenever I miss training days and it doesn't bother me, I figure my body is telling me it needs rest so it's a good thing.

The one ride I had was last Thursday in DC for about 7 hours.  It started with a group ride from the Georgetown District in the morning with guys from Cycle Life USA. This ride usually happens on Hains Point in DC but the National Cherry Blossom Festival was/is going on there with a bunch of tourists making it difficult for a large group ride.  The alternative ride headed west on MacArthur Blvd; rolling on parkway stuff mostly, it was pretty fast & fun; about 18-20 guys single file the last 10 miles or so. 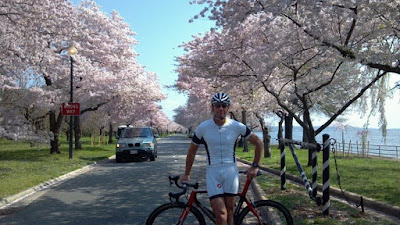 After that I chilled out rolling around the DC Mall for a while; visiting a few of the newer monuments, also checked out the Cherry blossoms on Hains Point (pictured above), had some coffee and then called my friend Chris Reagan (pictured below).

Chris is the reigning Masters National Points Race Champ & Team Pursuit National Champion.  His team also set a new Masters National Record.  Chris is a cycling Spartan in every good sense.  His training approach is super structured & disciplined (on and off the bike), which mine isn't, but I have great respect for his way of doing things.  Chris is also a very good dude and obviously a great rider and an even better competitor.  He lives right on Capitol Hill a few miles from  Hains Point, his preferred training ground, so I figured he might be around.

Turns out he was, which was cool because a month or so ago we talked about connecting for some training and this time it worked out.  We met at 3pm.  I was a little tired from the group ride earlier, so just sat on Chris as he rocked out a mighty impressive 40 min LT session.  I pulled a couple times but it was uncomfortable for me.  I could tell my legs were out of good stuff so I just spun on his six.  After that we rolled easy for and hour or so chatting, got caught up on backgrounds and the DC cycling scene and such. It was cool and I'm glad that I reached out.  Good stuff.


So all in all, it was a great time and a well deserved and overdue week away; with the hap's in Philly being the highlight (& good material for a later entry).  Today I'm feeling super motivated, refreshed and ready to get back in the saddle.  My Museeuw is calling!