Yesterday morning I overslept but woke up feeling a good groove about the day ahead; which isn't always the case.  Sometimes, in order to tackle the day, I have to take a deep breath and mind mantra something not unlike 'make it a great day' to myself in an annoying baritone whisper.  This wasn't the case yesterday which is refreshing and a nice way to be.

I'd planned to race my bike in Connecticut with some friends but I was way behind schedule and the thought of forcing a two hour drive for a one hour race tilted my decision to just stay local.  And I'm glad I did because through serendipitous circumstances and the need to burn up a few hours, I ended up just noodling around these parts and happened across Cafe La Mattina in Maynard, MA.

I've mentioned here several times; my enjoyment of blending certain excursions with a compulsory cafe stop. Yesterday turned out to be one of those days.  A new friend recommend that I check out la Mattina so I did and I wasn't disappointed. 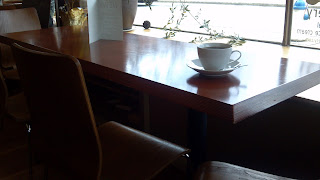 As I approached La Mattina it definitely presented an agreeable European suave. Which was an unexpected pleasure given it's innocuous location in the heart of downtown Maynard, MA.  Maynard isn't a destination town, as per say but it does have heart and an unexpected pleasures, like this little cafe.

I introduced myself to the owner after I noticed him observing me taking a couple pictures of the place and spoke with him for few moments.  Turns out 'Samir' had previously owned three Cafe's in Darmstadt, Germany before opening La Mattice two years ago.  He mentioned that he had followed his wife to the States some time ago and after selling his European Cafe's he opened La Mattice.  Samir described to me his specialty in making exquisite Parisian style crepes, sandwiches and espressos using the finest ingredients and authentic round grills.  Guess they also have some killer ice cream in the summer as well.

Anyway, my main things around Cafe's are two fold.  One, do they have a great tasting house blend black ?  And two, does it's ambiance have commensurate balance with my bike snob impressions as a cyclist racers' cool destination spot.  Cafe' La Mattin's meets both of these.  And while it's esthetic is very different, I would put it on par with Gula-Gula Cafe, in Salem, which is saying something.