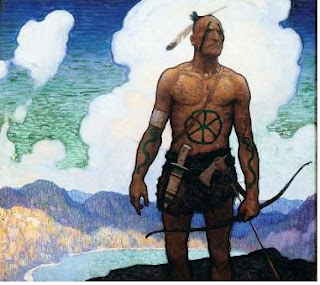 It's 60 degrees here in Massachusetts and I have some friends coming over to ride after coffee.  It'll be a chat pace w/ some efforts mixed in for like 3 hours. Not too hard because old guys like us need 2 good recovery days before our version of Alpe 'd Huez on Saturday.

Today we're going to noodle through the Wachusett basin intersecting the Nashua river located south of Mt Manadnock. It's a flat route mostly and today's pace means that my eyes will be open to take in all the scenery and such.

If you are paying attention while riding in Massachusetts it is impossible to not recognize that nearly all the landmark rivers and mountains have Native American names.  The state itself (Massachusetts) is an Indian word.  Not sure I should say 'Indian' these days.  No offense intended.

The section of roads we're going to roll through today were; in the 1600's, the same territory where most of the Indian-Settler conflicts took place during the King Phillip war.  We're going to roll right through the town of Sterling (not an Indian name) where 51 settlers where slaughtered by the Nashua tribe.  It was the largest conflict by far.

The Indians won the battle but lost the war.   Aside from the many Native American names on natural landmarks around here there is precious little evidence left pointing to the thriving and noble culture that once roamed these pretty sweet grounds.  Man's inhumanity to man?   Kinda weird.

If you haven't guessed, I like history a lot but I really like riding my bike through it even more.