Ever just wander?  I like to but its a huge luxury.  If you have the time to just wander around exploring roads on your bike its going to cost you. I do it once a week, sometimes more.  Sure, I loose some business because of it, but I don't care too much.  Its my therapy and my church so it's worth it.  And besides working extra hard for a little more money can really suck. It makes people act stupid.

I went wandering yesterday.  Wandering on a bike doesn't mean you don't go hard and gain fitness because you can/do.  I make it as hard or as easy as I want.  It's basically a fartlek ride but different in that I do it on new roads (adds muscle confusion benefit) and it includes a compulsory cafe stop in the mix. 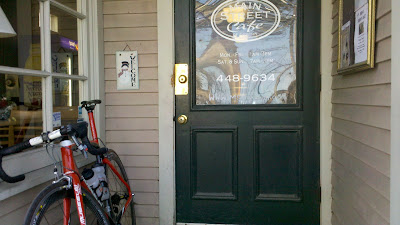 Wandering on a bike is a pragmatic riding choice that links practice with theory to the aesthetic which are the metaphysical essence of riding.  I enjoy this more than anything.  Its the best lens through which I consider the quality of a ride.

That having been said, wandering with a friend can be cool too. Yesterday my friend Ward Solar & I connected to ride.  Ward has a war-chest full of bike medals.  He was a Pro for a few years but always kept one foot close to a regular job & life outside of cycling.

I first heard about Ward when he soloed the last kilo to win NYC Invitational. There were like 200 guys, mostly Cat 1's. His win that year stuck out in my mind because I placed second the year before.  Or as I like to say these days, I was 1st of the clean riders.  Regardless, Ward won it a year later in insane fashion and when I had opportunity to meet him a few years ago we hit it off like brothers straight away.

Ward and his contagiously happy wife Nicole recently bought a house outside of Nashua, NH.  Yesterday Ward invited me to roll the roads up there.  Unbeknownst to me Ward, it turns out, likes to Wander too.  Not too surprising.  I understand the World's top rider Philippe Gilbert trains 100% by feel too.  He calls it The Sensations.  No power meter, speedometer or Strava.    Herein lies the take away....be self aware.