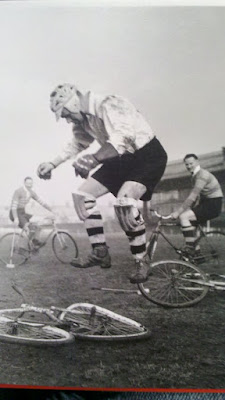 Flipping through a zen book in the reception area of my sports massage therapist Susan Feist I came acorss this picture.  It looks like polo on bikes a long time ago.  I didn't know there was such a thing but this picture is pretty funny!

This guy is wearing a helmet and knee pads so he must have been some kind of goalie.  Whatever he was he's ragging quite the hate-on here.  I've never stomped my bike like this.  I doubt if many riders have.  Beating the crap out of your bike just doesn't happen all that often.  Although I do remember Bjarne Riis violently chucking his TT machine in the 97 tour.  I watched it live and thought he was going to stomp on it as well when he walked over to pick it up.  I wouldn't have blamed him if he had because everything went wrong for Bjarne in that tour.  I don't think he ever recovered from that.

The dude in this picture must have been considerably more pissed than Bjarne though.  The fact that his rear wheel is already bent like a pringle leads me to suspect he was jack-hammering the hell outta that behutch!  Something really personal must have happened to him. Maybe the socks?

That having been said he is also displaying some decent agility a pretty high vertical jump as well, for a cyclist that is.  Most cyclists don't look good doing anything other than pedaling.  I have thoughts around why that is and may share them on some other entry. Regardless of all that, this guy is showing me that if he was a racer he would likely have been a sprinter.  Sprinters need a nasty temper, agility and a jump.