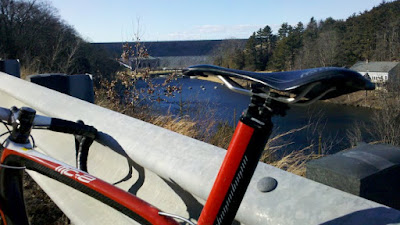 I roll around the Wachusett Reservoir a couple times a week.  It's a about 10 miles from my place in Harvard and once there it's an easy 17 miles to loop around it.  The picture here is the back side of the damn built over 100 yrs ago, mostly by Irish immigrants.  There is walkway on the top where you can read all about it.  I guess there was a full-on town (Boylston) located in the low ground where they wanted the reservoir to be. In the day the purse strings had more overt; or perhaps just more open, leverage than they do today and simply told everyone living there to leave their homes, schools, churches, everything and then just flooded the whole place.  So under all that water right now, there's full-on town. It's sorta weird to think about.  Imagine trying to get away with that in 2012? 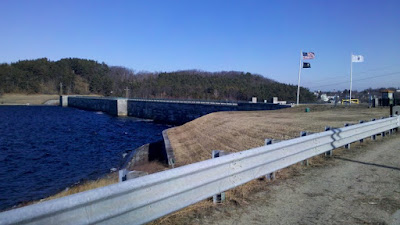 Today is a recovery day and I'll probably spin around the reservoir but it's going to get real busy later on so it'll be short, 90 min max.

I'm meeting w/ Andy at DuVine Adventures in a few hours to see if we can set up an elite excursion tour in the Alps or Dolomite's for late July/Aug.  It's for way more serious riders than typical touring cyclists but it won't be 10 days of death march rides either. It should be a hybrid of the two, hard riding on epic climbs during the day, opulent accommodations at night.  I'll keep the posts going as it ramps up.

Later this afternoon Husam has a surprise somebody coming into the shop (Ata Cycle)  and asked me to come in.  I have no idea what the deal is but last time he said this I ended up riding one on one with the owner of Guru Bikes out of Montreal. Which was really cool.  I learned all  about Guru's background, philosophy and unique custom manufacturing process.  Robert also makes a produces for market his own red wine so we shared some Vino afterwards as well.  So you never know what could happen.  Should be interesting at the least.
The first race is just 4 weeks away and I can't wait.  Most of the guys in New England do cyclocross so they race all the way into January.  But for me I haven't raced since October and I'm getting rammy.  Makes me want to train hard again today but that would be a mistake.  Absorbing and recovery is way more beneficial.  A bunch of guys are doing those computrainer races now too, or they do these group indoor sessions for 3-4 hours.  I used to do a lot of short indoor stuff but not any more. I'm done with that & can't even imagine it anymore.  There's a fun factor of Zero in this kind of training for me and I'm at a point in my life where if it isn't fun I ain't doin it!
Posted by jughead51 at 8:29 AM